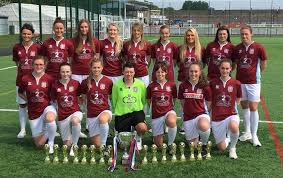 A few references have been found that allude to the origins of a town football club playing in the early 1870s on a recreation field on what was known then as the Lawe Heugh, somewhere now lost without trace on the Lawe Top, rented from a local farmer, and before houses were ever built there.

It would be a task indeed to locate confirmatory evidence and that would require dedicated research to find documentary facts and actual proof if indeed any could now be found.

2013 marked the 125th anniversary of the first recorded public appearance of a named South Shields Association Football Club that in 1888 played a number of friendly games that developed into a three years series of such fixtures. From those early times, the town club has been subject to both fortune and misfortune in full measure of both halcyon days of great success and also periods of severe reversal and twice of total loss, and been subject to subsequent reformation on both occasions. So, for the historian to trace the history of the club in all its incantations is a fascinating challenge, with many twists and turns in a convoluted career that is very different in many respects from the norm of what one would usually expect. Having said that, its labyrinthine career has set it aside and made its history so much more interesting as a result.

The name of Jack Inskip features prominently in the early annals of South Shields FC, and he is credited with the formation of a junior club in 1899 of local school boys from the Adelaide Street area of Laygate, that progressed beyond all measure for its eventual development to be ultimately elected into membership of the Football League in 1919. This team was known as South Shields Adelaide Athletic, and based on his experience gained earlier with South Shields Adelaide Albion, and with his father Christopher’s managerial assistance, it enjoyed a continuous rise through the junior leagues of the district.

It played on a pitch at Hartingdon Terrace immediately adjacent to Wood Terrace, until the 1904 disbandment of South Shields Rugby Football Club whereupon it was successful the following year in taking over the then Horsley Hill enclosure.

In its early career, it was successful in winning the South Shields Junior Alliance, the South Shields Juvenile League ‘A’ Division, the Shields and District League, then the Tyneside Junior League and the Tyneside League. During this period, numerous trophies and medals were also won, including the Big Budget Junior Football Cup in 1903-04, the Shields and District League Championship in 1904-05, together with three other trophies: the Tyneside League Championship in both 1905-06 and 1906-07, and the J. Hunt Shield and James Knott Cup.

In 1907, it successfully applied for and gained membership to the Northern Alliance, where it remained for one season, finishing a most creditable third in the league table, and winning the James Readhead Cup. Centre-forward Jack Peart was transferred to Sheffield United in 1907, and later in his career appointed manager of Fulham and Bradford City, and he was a member of that successful Shields side.

Progress was further made with its elevation to membership of the prestigious North Eastern League, the North East’s premier regional league for the season 1908-09, wherein it won runners-up honours to Newcastle United Reserves. Remarkable progress had thus been made in less than 10 years from its formation, as the ‘Laides’ had achieved a meteoric rise from humble and comparative local obscurity to membership of a league now but one step from the Football League itself, and ambition thereafter knew no bounds …..

The 1908-09 season was opened at the Horsley Hill Road ground, now replete with the requisite ground facilities, and new league members Huddersfield Town were the first visitors. Shields were by now sporting the most appropriate colours inspired no doubt by maritime connotations of its major seaport home of red and green, being port and starboard. Well worthy of mention in that team are ex-Newcastle United Billy Wilson, and Pat Cassidy, who once scored a goal from the halfway line and went on to star for Cardiff City, as well as Peter Howe, an ex-Harton Village schoolboy who joined Shields after service with Reading and Hull City.

Re-organised two years later as a limited company in 1910, the club now changed its official title to that of South Shields Football Club. In season 1910-11, it was victorious in the Durham Challenge Cup. A major capture in 1912 was the famous Arthur Bridgett from Sunderland as player-manager and captain and a former England international, as well as numerous other quality players, not least of whom was the prolific goal-scoring centre forward signed from Manchester City, Irvine Thornley, who was also a former England international.

It is true to state that these few years prior to World War One were the most successful and productive ever achieved in the complete history of all teams that have carried the Shields colours, with numerous records made and smashed, plus two consecutive North Eastern League championship titles won, in which seasons only four games were lost. This was an outstanding team and a future in the Football League was openly discussed. The club also commenced the issue of match programmes and season tickets in 1912, and again won league honours as runners-up to Darlington that season, and was admitted into full membership of the Football Association, and was riding on the crest of the wave.

The 1913-14 and 1914-15 campaigns turned out to be most remarkable for Shields, and the statistics are indeed memorable. They were winners of six trophies, champions of the North Eastern League in the first season by a margin of 15 points, and also winners of the Durham Football Association Challenge Cup, the Ingham Infirmary Cup, and retained the Black Cup (Tynemouth Infirmary Cup). The reserve team also added to the club honours by winning the Tyneside League championship and the Tyneside League Challenge Shield. A new season record of 69 points was achieved out of a possible 76, and Shields just failed to beat the league record goals tally of 134 goals set by Newcastle United, by one solitary goal.

Player-manager and captain Arthur Bridgett ended the season with 30 goals to his credit and 47 appearances, and his services were retained with a further five years contract, and in 1913 Shields also made an application to join the Football League. While receiving no votes, they resolved to try again.

In the following season, the league record goals tally was quite simply blown away as Shields amassed a new record with a huge 160, and centre forward Irvine Thornley ended the season with 70 goals to his credit, a phenomenal record by any standards and at any level. A most unusual occurrence was the fact that Shields fielded no less than FOUR players with the same name, three of whom were brothers – Ellis, Ben and Fretwell Hall and Jack, another record no doubt ….

The outbreak of war thereafter put matters on hold and clubs fielded ‘shadow’ teams on account of military service manpower requirements, though competitive football, albeit in this form, continued. It is of more than passing interest to mention that one particular game between cross-river rivals South and North Shields in 1916 in the wartime Tyneside Combination saw South field no less than NINE internationals – and still lose!

Shields were champions of the league 1915-16 in first and second competitions. The last wartime season was spent with another grouping, the Northern Victory League, with South Shields well-represented. The objective of Football League membership for the club had been a long-held dream, and in 1919 the years of effort behind the drive came to fruition with its election to the Second Division, or the second league as it was then titled. This was no calculated gamble on the part of the club directorship, even with the close proximity of both Sunderland and Newcastle United. It was the firm belief that a town with the population of Shields could and would sustain a league club.